The Effect of Symbols on Our Energy 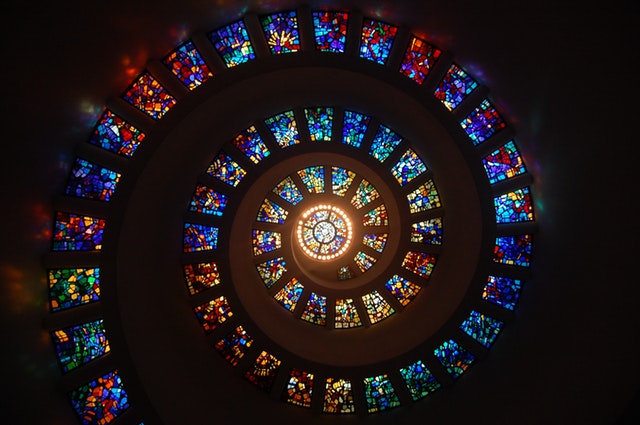 The first time I properly explored clairvoyance was during a retreat where the purpose was to develop our non-physical vision and make it 'work'. For the first few days I wondered if most of the people there were deluded or just pretending to be seeing things that weren't there. They were describing colours in the air above us, moving energy, and images of stars and sparkles that I was far from convinced were actually there.

Anyway, it got to the point where I understood that I was either going to stay quite bored and frustrated with what I was experiencing (or rather, what I was not experiencing), or I had the choice to become really open to the possibility of seeing in a whole new way.

I started sharing whatever impressions I had even when I wasn't sure about them or they were quite vague. I wasn't quite 'seeing' in the normal physical sense of the word, but seeing in my mind's eye. It was like remembering an event or object and seeing a picture of it from memory even though it's no longer physically there. I started seeing pictures like that except they weren't from memory, they were moving and occurring in the here and now. I didn't know if I was really seeing this stuff or making it up, but I allowed myself to experiment and share nonetheless.

It became more interesting when we began to share our vision in pairs. Rather than 'putting vision on' the energy around us, we started tuning in to ourselves and other people. At one point, I chose not to share what I saw in case it influenced the person I was sitting across from. The vision that came up was of a white flower twirling around the energy at my heart centre. After some moments of silence, the lady in front of me described what she saw as a white flower spinning around the centre of my heart. I decided that regardless of our potential to make things up in our minds, in this situation there was something else going on if another person could see the same vision that I had.

What happened unexpectedly after I got home was that I continued seeing what was not physically there. I remember visiting my parents and talking to my dad, and there appeared to be a sort of crown of symbols above his head. At the risk of sounding crazy, I shared what I was seeing and he asked me what the symbols looked like. To me they appeared to be symbols from another culture – I already knew that Dad was into Tibetan Buddhism so I guessed that they were Tibetan or Sanskrit. There were about five symbols around the edge of this invisible crown and one in the centre. Dad had shared meditation techniques with me before which normally involved visualising a higher being or deity above the crown, as opposed to symbols, so I didn't know what they could have meant.

Dad pulled out a piece of paper from his cupboard and asked if the symbols drawn on it were the same ones I was seeing. I agreed that they were. I was surprised to see that the symbols were actually in the shape of a circle with one in the centre. He told me that this was his primary meditation technique at the time, visualising those Tibetan symbols above his crown and reciting a mantra.

As much as I was impressed by the fact that whatever I had learnt over the previous week in terms of non-physical vision seemed to have stuck with me after I had left the retreat, I was more impressed that the meditation Dad had been practicing, and his visualisation of the symbols, had actually made an imprint on his energy to the extent where a relatively newbie-clairvoyant could sense them clearly enough to describe what they looked like.

Years later, when I mentioned that I couldn't see those symbols around Dad's energy anymore, he confirmed that he was no longer practicing that particular meditation and had switched to another technique.

I was reminded of all this only a couple of weeks ago, while at a workshop where we were learning about energetic healing and the power of symbols. To demonstrate the potential effects of certain symbols and words, the workshop facilitator held a cup of water in her hands and started talking to it, saying things like 'okay, you are a cup of tap water, just simple tap water …' and then held a pendulum above the cup. The pendulum moved a little but not too much.

She then picked up the cup again and spoke about how wonderful the water was, how grateful she was to have it there, and how much she loved water. When she put down the cup and held the pendulum above it, it started swinging back and forth in a way it certainly hadn't before, and I stared at her hand to try and check if she was consciously or unconsciously moving it in any way.

Lastly, she drew a symbol in the air above the cup of water – the same symbol that we had in front of us on a sheet of paper. The symbol was said to have a very grounding and energising effect. She also repeated the word associated with this particular symbol a few times as she was outlining the image of it with her hand. As she sat back casually and held the pendulum up again, I noticed no real movement at first. But as she continued talking to the class, with her hand appearing perfectly still, the pendulum began making circling motions – they were small to start off with, but they grew larger and larger. It reminded me of a bit of those swing-rides I used to go on at the Easter Show. We would sit on a seat with our legs dangling out the bottom, get buckled in by the ride-attendant, and once the ride started we would swing around at a slow pace at first, with the speed gradually increasing to the point where you couldn't focus on anything, and the swings would raise up quite high with the momentum so we were far off the ground. The pendulum ended up looking a little like that – it was swinging around rapidly and high up enough that it was closer to being almost parallel with the floor rather than perpendicular to it the way it started.

We were encouraged to play with such symbols with our own energy, such as by visualising them in the air above our heads or by creating a massive symbol in front of our bodies and then stepping into that space, feeling what effect (if any) it created in ourselves.

I've heard mixed things about visualisation. Some people describe it as more of a fluffy tool that need not be taken seriously – after all, you're just creating some mental picture of something that isn't really there. Others swear by visualisation techniques as an effective way to relax, to move closer to our potential and eventually achieve future goals we've set for ourselves, or, as in the example described above, to actually change or affect our energy right here and now in some way.

If energy noticeably changes depending on what we visualise or on the symbols we create and the words that we say, then it gives new meaning to practices such as positive or negative self-talk, repeating a mantra, visualising our chakras being cleared or even picturing how the day ahead is going to be for us. While it can be argued that imagining a worst case scenario can help us to plan for whatever may happen and to keep us prepared, in light of this concept that what we focus on affects our energy, it may make more sense to imagine the best case scenario instead, for any situation.

I think if this stuff interests you then it would be worthwhile to experiment and explore what visualisation can offer you, and to especially work with any symbols you feel drawn to even if it's just for a short period of time.