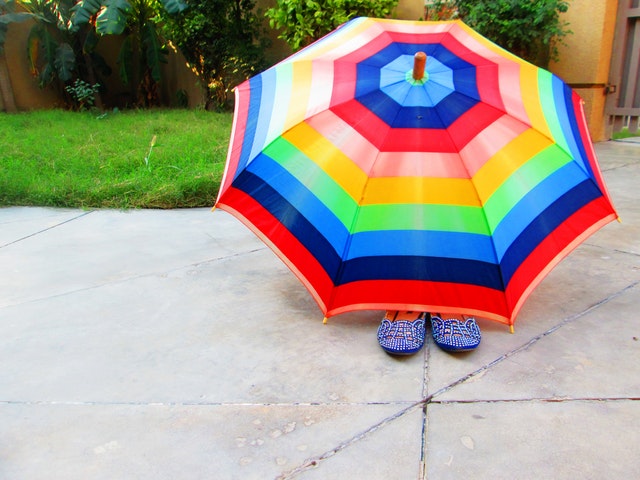 This month I'd like to touch on the topic of energy protection in crowds and other places where your energy may be affected.

You may have noticed that crowded places like shopping centres, festivals, and train stations can affect your energy in a big way, and that you sometimes leave those places feeling lethargic.

I remember many years ago talking to an intuitive lady at a friend's wedding. She had gone on a ghost tour the night before at Quarantine Station (Q Station) in Many, NSW. We starting speaking about the paranormal and about the need to protect one's energy at times.

“What do you do to protect your energy?” she asked. At that stage I didn't know much at all about energy management techniques. I acknowledged that I often felt my energy levels drop when in crowds, but assumed that maybe I was just tired due to being more active – e.g. walking around for long periods of time or rushing around to do shopping. This lady was of the opinion that no matter what you do in a crowd, you'll start to feel drained after a while if you're not careful, simply because you are coming into contact with the energy of so many other people.

She advised me to put a layer of energetic protection around me the next time I went to a crowded place by visualising a bubble of light surrounding my body. I forgot to try that technique afterwards, but was reminded of it again last year when preparing to go to the Mind Body Spirit (MBS) Festival.

If you don't already think I'm a little crazy, be warned that the following information may lead you to think I'm completely bonkers!

After being asked for the first time to do aura photo consultations and readings at the MBS Festival, I had my doubts as to whether I'd be able to manage my energy well in such a crowded area. Normally I prepare for at least 15 minutes before a reading in a quiet place while tuning in to a person's energy and writing notes about what comes up. How was I going to cope in a situation where it's noisy, busy, and with no preparation time at all?

On the morning before the festival, I had an experience while meditating which I was not expecting. I felt my awareness travel upwards until reaching what my professional intuitive trainer describes as the 'white room', a space from which I do readings. I was surprised to see that the white room looked like it was being decorated. I got the image of guides setting up a table and chairs and even placing a bottle of champagne on the table (“spirit guides drink?” I wondered). One of them explained that other people's guides would be welcomed into the room throughout the day, and that I wouldn't need to do my normal preparation before seeing each person. I also felt like a column of light was placed around my body – this would help protect my energy in the crowd, and I remembered that conversation about energy protection from years earlier about Q Station.

While at the festival, I tuned in every now and then to the white room, which appeared to have various guides there depending on who I was sitting with. One memorable thing that happened was when a lady came and sat down next to me with her aura photo. I saw what I assumed to be her guides sitting at the white room table and sipping champagne, and they said, “She just wants to talk”. Sure enough, the lady spoke about what was happening in her life and wasn't particularly interested in discussing the photo. After a while I thought it would be good to at least cover some information about the chakras, but at that point she stood up and said, “Thank you, I enjoyed that” before walking away. I got the image of her guides standing up and saying as they left the white room, “See? She needed to talk. Thank you”.

At the end of the day I was quite energised rather than drained the way I often feel after spending a whole day at a festival. When I tuned in to the white room after the festival was over, it was a little like seeing someone's place after all the party streamers and extra furniture had been put away following a celebration. It was back to being a plain white space.

At the more recent MBS festival last month, I decided to spend some time looking at the other stalls during my lunch break rather than going outside. Thinking that I wouldn't need energetic protection while I wasn't doing any work, I walked around without my little bubble/column of light. By the end of that short break, I felt my energy had been zapped.  I'll try to remember to visualise that column of light around me when I go anywhere that's very busy or crowded from now on, regardless of what I'm doing there!

Drawing Your Chakras In

Another technique I've been told about is to consciously draw your chakras inward so that your energy is less open and vulnerable to outside influences. What you do is place your awareness at each of the seven major chakra areas, one by one: at the root of the body, the lower belly, solar plexus, heart/middle of the chest, throat, third eye, and top of the head. Then pull in your energy so that it's more like a small solid ball in those areas rather than wide out. If it's hard to feel anything, try visualising your chakras moving inward so that they are well inside your body. There's often a fine line between visualising and actually changing your energy, so please don't dismiss this technique until you've tried it!

Back to Q Station

I ended up going on a ghost tour myself at Q Station, a place that was once used to quarantine people with infectious diseases. It's been said that hundreds of people died there, and that many of their spirits remain. I read some very mixed reviews on Trip Advisor, with several people describing the tour as boring, partly due to having a tour guide who sounded like a “robot”, with a focus on the historical aspects of Q Station rather than ghosts.

Our group was lucky enough to have a very engaging tour guide. Whether or not she could really see spirits, she certainly believed she could and was entertaining while also being quite matter-of-fact about the whole thing. She started off by asking who in the group believed in ghosts, and who didn't. The group was split about half-half. She then encouraged us to describe what ghosts actually are. Someone said “energy”, and she agreed that ghosts are simply energy, but they can potentially affect our own energy in a way that we can feel sick or spooked, for example. She shared some stories about cases she'd witnessed where people were purposely disrespectful during the tour (such as by speaking about the deceased in a derogatory way), and became suddenly ill with headaches, nausea or even vomiting soon afterwards. We were told that if we respect others' energy while protecting our own, we would have nothing to worry about.

Overall it turned out to be a lot of fun, though I was a scaredy-pants at times. At one point, the tour guide set up an EMF meter on a mantle piece in an old room and began to talk about some of the history of Q Station. I sat next to another guy on a bunk bed and after a couple of minutes it felt like there was someone behind us against the wall. You know that feeling you get when someone's just there, or when a person is staring at you before you see them? It was a bit like that. Interestingly, the guy next to me turned around and stared at the blank wall behind us at the same time I did. I noticed that the tour guide had also stopped speaking and was looking in our direction. The EMF meter was lighting up like crazy. She asked us to move away from the bed and we gladly obliged. She told the group that it was okay if anybody wanted to leave the room while she continued with her talk. Believers and non-believers alike practically jumped from where they were sitting or standing and scrambled towards the door. Whether or not it was simply the power of suggestion, most people agreed afterwards that they had felt some weird energy in there.

There were times during the ghost tour where I felt guided to just quickly get out of whatever area we were exploring. This was kind of disappointing because, while I didn't want to ignore my intuition, I liked the idea of being able to sense energy on the ghost tour and experience as much as I could.

The last place we went was the old shower block, which really did feel particularly spooky. The tour guide told us a bit about this spot, then handed one of the participants the EMF meter before letting us know that she wouldn't be going in. I asked her about this towards the end of the tour, and she said that normally it's enough to protect your energy through managing your own emotions and fear, and respecting whoever or whatever it is you're dealing with. Sometimes, though, it's better to just stay away from places that you know aren't good for you or that can have a negative impact on your energy.

To summarise these techniques, if you feel that you may be in a place where you need to protect your energy, try visualising light around you in the form of a shield, column, bubble or whatever works for you. Then consciously draw in your energy so you are less vulnerable, and focus on the seven chakras one by one to pull the energy inside your body. If you feel like your guides want to protect you in some other fancy way, let that happen too :) Lastly, if the place you're in feels really wrong for you, it might be best to limit your time there or leave altogether.

I'll be in touch again in December, and I hope you enjoy some of these techniques if you get to try them in the meantime!