Auras and Colours and Clothes, Oh My! 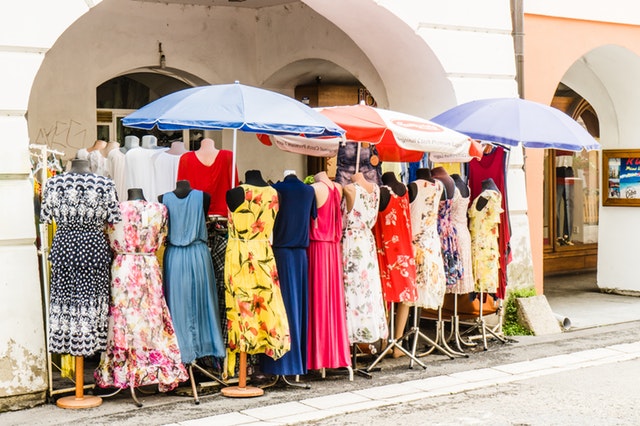 When I was in primary school, my friends and I went through a phase were we would take turns standing against a white or pale-coloured wall in the school playground at lunch time. Then we would all yell out what colour we thought we could 'see' around our friends' heads or bodies. The funny thing was, we would often shout out the same colour at the same time, or at least similar colours (e.g. 'Pink!' while someone else yelled 'Red!').

Were we really seeing auras? Even if we were just fooling around, it was pretty interesting that our perception of these colours seemed quite consistent.

I often wonder if we all intuitively sense our own and other people's auras, but as we get older we stop believing it's possible. Having said that, I also remember going home and convincing my siblings and parents to play this game too – so there's no reason why people of any age can't have fun sensing or guessing aura colours as well :)

At the Mind Body Spirit Festival last week, there was a Whole Body Aura stall where you could have a photo taken using aura video station technology. I'm not a technician and I can't claim to know all the ins and outs of such technology, but it's basically described as an interactive computer system which uses biofeedback sensors (little metal pads you rest your thumb and fingers on) to measure your energy and activity levels. The image that appears on the computer screen is supposed to show your bio-energetic field as well as your emotional state. The photos also display blobs of colour in each person's chakra areas.

Originally I thought it was crazy that such information could be captured through a machine. As one passer-by commented, “What colour is sceptical?” before he walked away.  But each person who had a photo taken also received a short consultation/reading afterwards, and most said that the description of their energy, spirituality and lifestyle as based on their photo was spot on, which suggested that the technology wasn't too bad at creating accurate aura photos.

A funny thing seemed to happen with a few people who had predominately purple or purple-pink photos – each one said (and these were separate people on different days at the festival), “I knew my photo was going to be purple even before it was taken!” Purple is the colour associated with intuition and vision, so it made sense that anyone who knew in advance what their photo would look like would probably have a lot of purple in their energy.

At one point, the man in charge of the stall walked over and told one of the stall helpers that she had a lot of red in her aura on that day. We waited until no customers were queued up for a photo, and she tested herself to see what would show up. Sure enough, it came up as all red. So it is possible to get a feel for aura colours without using any special technology for it.

I also had my aura photo taken shortly afterwards. Interestingly, it appeared really similar to the photo I had last year (there was a lot of green and yellow). Another reader at the stall looked at the photo and mentioned that my throat chakra could potentially open up more. He expressed his belief that auras and chakras can be shifted within a matter of hours or minutes. So I committed to consciously opening up more in this area, and a couple of days later I had my aura photo taken again. I was pleased to see that although the colours hadn't changed much, my throat chakra appeared much bigger!

Regardless of whether you believe you can sense aura colours or not, a simple thing you can do is start wearing clothes that you feel 'match' your energy on a particular day. You might have had the experience of waking up and just really wanting to wear a certain colour, even if you don't normally wear it, and then you end up hearing lots of comments from other people throughout the day on how great that colour looks on you. I've experienced the opposite too when I've worn a piece of clothing that I really didn't feel like wearing – for example, I had already bought it for a special occasion, or it was hanging up nicely and ready to be worn and I couldn't be bothered ironing the very crumpled shirt that I actually wanted to wear – and I then felt kind of out-of-sorts for the whole day, even if the clothing itself looked good from a logical standpoint. It's as though certain colours can cause your energy to drop, and rather than compliments you might hear things like, “oh you look a bit tired” or “need a holiday?”

Try it for yourself and see how it goes. Each day when choosing what to wear, ask, 'Does this give me an energy boost? Or will I feel drained if I wear this today?' Often the colour that will boost your energy will stand out from everything else. And if nothing in your wardrobe lifts your energy when you see it, maybe it's time for some clothes swapping or shopping!