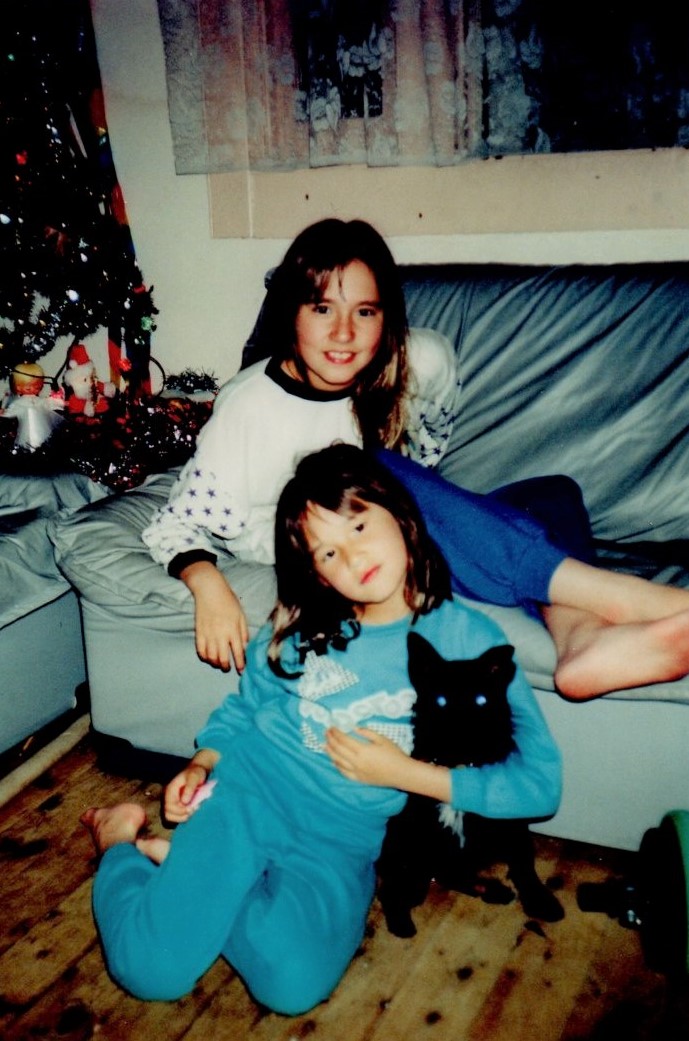 There is now a new ‘Vegan’ tab that has been added to this website, where you can view previous vegan-related blog posts that I’ve had published and helpful resources too. You may wonder why this has been added to an intuitive-themed website.

Let me digress for a moment, and share a story about my family’s pet dog, Titan.

Titan was a little mongrel who we loved dearly from the get-go. A family friend, who happened to be a vet, gave him to us after someone had brought him to the vet clinic. He had been found running along Parramatta Road – which is an incredibly busy road in Sydney – with no collar or other indication that he was being cared for by anyone. He looked like a puppy because he was so small, but our friend confirmed that he was fully grown and estimated that he was already one or two years old.

At first, we thought he was mute because we heard no sound from him for weeks. He soon made up for lost time by becoming one of the noisiest dogs in our street, as well as an absolute menace to the local postman. My uncle nicknamed him Fang. Despite his occasional antisocial behaviour towards people like the postman and other animals (including the horses he thought he could take on at Centennial Park, clearly not realising his disadvantage in terms of size), he brought us a lot of joy and we called him Titan because, as my mum used to say, he had a “small body but a big heart”.

Despite his risky shenanigans early in life, such as playing with traffic, he lived to be approximately 19 years old in human years, which as you may be aware is quite ancient for a dog.

For years before his death, we were advised by vets and neighbours to consider putting him down because he was getting so old and, they argued, it would be cruel to let him go on for much longer. We agonised over this, because how could we know if it was time to put him down? Yes he was old, but he was still wagging his tail, still showing excitement before his daily walks, still enjoying the sunshine outside in the backyard where he would sit with his eyes closed as he used to do when he was young. Around this time I was told by someone who recently had her own dog put down, “Animals will tell you when it’s time. They won’t want to walk, they’ll stop eating. They’ll tell you”.

And what she said was true. Titan did stop wagging his tail, he stopped eating properly, and he went from jumping enthusiastically whenever we pulled out his walking leash to no longer showing interest in those walks. He had developed cataracts and arthritis. At his final visit to the vet clinic, we understood when we were told that it was time to say goodbye, and although there was nothing else we could do to prolong his life or improve the quality of it, we were devastated anyway. My parents, siblings and I stood around him and cried and stroked his black and white fur until he was gone.

I remember people were very understanding after Titan died. Numerous friends shared stories about their own pets who had passed away, comforted me and said that losing a dog can be like losing a family member. Some said it took them months or years to get over it.

This was a completely different response compared to when I first faced the death of a pet over a year before Titan was put down. Our family bunny Toffee died unexpectedly one night due to a cause still unknown to us. I was shocked and sad at the time, and cancelled a social event I had previously agreed to go to. It didn’t occur to me to provide any excuse for this, other than the honest explanation that I didn’t feel ready to socialise after our pet rabbit had just died.

As opposed to receiving messages of condolences as I did for Titan, no one responded or commented about Toffee. I even felt a bit ashamed, as though perhaps there was something wrong with me for letting the death of a little rabbit stop me from going out and partying with friends shortly afterwards.

Looking back, I can only identify one main difference between these two very similar events, and that was the type of animal involved. Apparently, it made complete sense to others that I’d be upset and bail on a social event after the death of a pet dog, but there seemed to be much less understanding shown in the same scenario following the death of a pet rabbit.

I was not yet vegan at the time Toffee died, but since becoming one it has become even more obvious that people respond very differently in similar situations depending on the animal concerned. For example, it seems that it’s okay to rave about the gorgeous colourful lorikeets that visit my balcony, but not quite as acceptable to talk about how funny the chickens and hens are at my local community garden (my husband names them by colour: “Here comes White Chocolate … oh look! Now Caramel’s running our way … Dark Chocolate’s not far behind…”). People love to see selfies with quokkas, but appear less enthusiastic when shown photos of cute pigs playing at an animal sanctuary. It’s fine with most people if you want to stand up for the protection of certain animals out in the wild, but it suddenly becomes more controversial to stand up for the protection of animals used in the production of food.

In Honour of Titan

For the 60-day Submersion course that I wrote about earlier this year, one of the final lessons was on the topic of loss, with an invitation to take some sort of action in honour of a person, animal, or thing we had lost previously.

I thought that in honour of Titan, I would make some effort to be more open about my love for animals (of various species!) and my passion for veganism. I’ve been able to write about such things to some extent, but not so much to share this openly through any verbal discussion. So the action I took was to focus my March 2019 update on the vegan spirituality interview that had recently taken place, during which I had spoken for the first time about my vegan journey. I included a link to that interview and a summary of what was covered, even though I wasn’t initially comfortable at the thought of letting anyone know about it outside my immediate family (especially after one relative told me how much she laughed as the video replay kept freezing at unflattering moments).

Prior to the interview, I was asked to provide a photo with a companion animal. I couldn’t find any recent ones, so my mum agreed to take a photo of me holding another pet bunny, Smokey (this can now be seen on my updated ‘About’ page).

About 15 minutes or so after the interview started, I was questioned about an article that I’d written a few years previously (on coping with trauma related to animal cruelty) and whether it was available on my website. Not only was it not on my website, but I couldn’t remember when it was posted or clearly direct people to locate it on the internet. I received more messages about that article after the interview was over.

Within a month of the photo with Smokey being taken, he died. It had been over a decade since my embarrassment over mourning Toffee, and yet after receiving the phone call about Smokey’s death, I still found myself reluctant to explain to the people around me that the upsetting news was in regards to my parents’ pet rabbit.

I finished the Submersion course for the second time last week. I thought that this time around, after listening to the lesson on loss again, it would make sense to take my original action step and build on it further by sharing the article on trauma that had been requested. I dedicated this action to the memory of Toffee and Smokey and the other bunnies loved by my family in between. I found the article, then added it along with a number of other old vegan-related blog posts to my website as well.

These were originally published by Vegan Education Association Sydney (VEA), formerly Sydney Vegan Club, and the international animal protection organisation In Defense of Animals (IDoA). They were written with the aim of empowering and helping people who were already vegan or open to veganism; in other words, they were created with a vegan-friendly audience in mind. They were never intended to convert or convince or otherwise encourage anyone to adopt veganism (so if you have no intention of exploring a vegan lifestyle, these are probably not going to be of much value to you!). Otherwise, please feel free to take a look at the following articles if you’re interested:

I think that to follow our intuition as often as possible is the same as choosing to live in alignment with our truth. Embracing a vegan lifestyle was a massive step for me in the direction of staying true to myself despite the social pressure to not go down that road. It wasn’t necessarily clear before the vegan spirituality interview, but through answering those questions aloud about my intuitive path and my vegan path, I realised that they have really been one and the same journey.

I can certainly appreciate that there are many amazing intuitive people and readers out there who do not choose to abstain from meat or dairy or other animal products. At the same time, I can say from personal experience that my own intuitive ability seemed to skyrocket in the same year I became vegan. For me, spirituality and intuition and veganism are intertwined.

The actual name of the vegan spirituality webinar I was interviewed for was: ‘Attune Your Intuition to Empower Your Activism’. I’m not sure that there’s much point in being intuitive if we don’t use this ability to address the issues that concern us. Why even try to strengthen our intuition at all if we never harness it to act for change in the areas we care about? As touched on in last month’s update, it’s important to express what matters. People matter to me, animals matter to me, and veganism matters to me.

So that’s why, for all the reasons covered above, I have added a new Vegan tab to my intuitive-themed website. I invite you to check it out if you’re keen, and to ignore it if you’re not :)