Halloween and its History 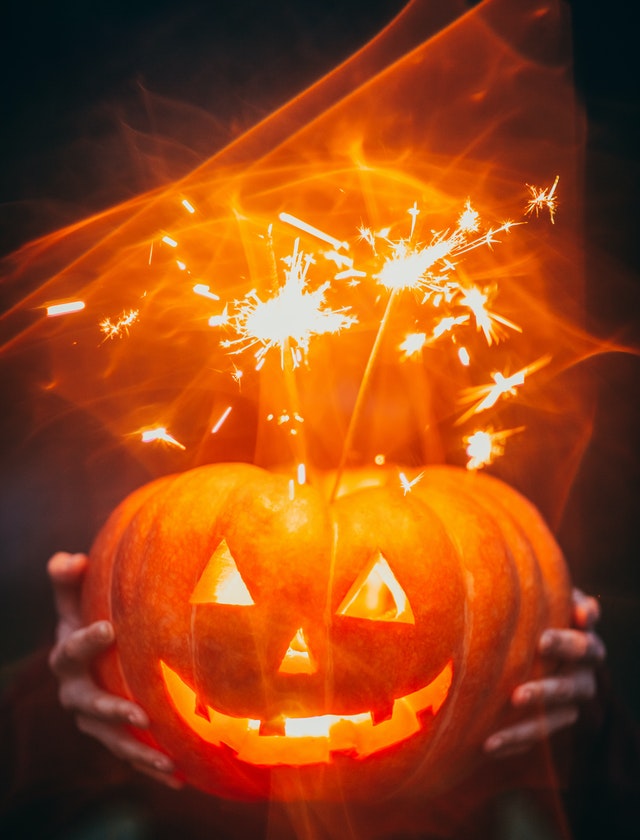 There are still 10 more days to take advantage of the 33% discount for the Clear Channel Course. The usual price will come into effect again after Sunday 31st of October – which coincides with Halloween!

What I used to know about Halloween

As a kid, this was the extent of my knowledge of Halloween:

• It was a yearly event when people would sometimes have parties and dress up as ghosts, monsters, and witches.

• Pumpkins were often hollowed out to make lanterns.

• There were rumours that spirits could return to haunt the living at Halloween. I couldn’t work out if this was true or just told to scare children for fun.

I was not the only one who lacked an in-depth understanding of Halloween. It wasn’t hugely celebrated in Australia when I was growing up, and it wasn’t until my late teens that some kids came around to trick-or-treat.

My Dad was the one who opened the front door.

“Trick or treat!” I heard the young voices shout.

Dad: “What does that mean?”

Dad, walking up the hallway calling to my Mum: “It’s Halloween, what do I do?!”

Flustered, my parents scrambled together a few apricot muesli bars and some dollar coins. Not typical Halloween treats, but the best they could do in the absence of candy.

I learnt more about Halloween and its history during a trip to Boston USA in October 2010. Boy, was Halloween a big deal there! There were spooky decorations in most stores I visited, houses were covered with fake cobwebs, and jack-o-lanterns could be seen everywhere.

There were tours and exhibitions in old buildings, with photos and detailed information relevant to Halloween. I even went to a “4D” live show, which was not only entertaining (I still remember the figure of a ghost flying from near the stage out to the back of the audience where I was sitting), but also educational, covering many historical events including the witch hunts and trials of Salem Village from 1692 to 1693. I hadn’t realised before then that Salem was in the state of Massachusetts, where I was while watching the show.

By the time I left Boston, I had discovered quite a bit about the history and traditions of Halloween. Here’s what I know now:

• The origins of Halloween can be traced back to the Celtic festival of Samhain (pronounced sah-win or s-ow-in) held on the first day of November.

• For the Celts, who lived 2000 years ago in what is now Ireland and the United Kingdom, the 1st of November followed the harvest and was celebrated as the new year. It marked the beginning of winter, the darker half of the year which was not only cold but filled with uncertainty regarding supply of food. The Celts believed that on the night before the 1st of November, the border between the living and dead became less clear. It was therefore supposed to be a time when ghosts could return to earth.

• People set bonfires to relight their hearth fires for the coming winter and to ward off trouble-making spirits. At times, they would wear masks and disguise themselves so as not to be recognised by any ghosts.

• The Celts believed that the souls of deceased loved ones were able to visit their previous homes on the night before the new year, and that mischievous spirits would cause trouble and damage crops. It was also thought that the presence of spirits allowed the Celtic priests, or Druids, to predict the future. Ordinary folk would also try to engage in fortune telling for one another on matters such as relationships, health, and death.

• The majority of Celtic land was claimed by the Roman Empire in the 1st century (by 43 A.D.). After conquering their territory, the celebration of Samhain was subsequently combined with two Roman festivals: Feralia, a day to commemorate the passing of the dead, and another day celebrated in honour of Pomona, the Roman goddess of fruit trees and orchards. In artworks, you’ll often see Pomona holding an apple or standing amidst apple trees.

• During the yearly celebration, apples would be used for divination games. For example, young people would attempt to bite an apple that had been placed in water or hung off a piece of string. The winner who was the first to successfully bite into the apple was said to be next in line to get married. For others who managed to bite an apple afterwards, it was believed that if they took the apple and put it under their pillow that night, they would dream of their future partner.

• In 609 A.D., Pope Boniface IV dedicated the Pantheon in Rome in honour of all Christian martyrs on the 13th of May. All Martyrs’ Day included a Catholic feast, also known as the fest of All Hallows.

• A couple of centuries later, it was decided that the event should include all martyrs and saints, and that the annual date would change from the 13th of May to the 1st of November, the same day as Samhain. It was called All Saints’ Day, also known as All Hallows’ Day or Hallowmas (from Middle English Alholowmesse, which means “All Saints’ Day”).

• The day after All Hallows’ Day became known as All Souls’ Day, in honour of all souls of the deceased, while the evening beforehand was named All Hallows’ Eve. These three days combined are referred to as “Allhallowtide”.

• All Hallows’ Eve was later shortened and renamed Halloween.

• While Halloween is often experienced as a non-religious event nowadays, there are many people around the world who still engage in religious practices on the 31st of October, such as by going to church, abstaining from eating meat, or lighting candles in honour of loved ones who have passed on.

• Historically, due to the idea that ghosts could come back from the spirit world to the earthly plane during Halloween, people would wear masks and other disguises if they left their homes after dark. This was done in order to fool those ghosts into believing that people were fellow spirits, or to even scare them away by wearing frightening costumes. To discourage any spirits from coming into their homes, they would place food outside to appease the ghosts and keep them away from the entrance to a house.

• This was a little different to the ancient Celtic tradition of honouring friendly spirits and loved ones who had passed on, by not only leaving goodies at the entrance to their homes but also setting places at their dining tables for them. Candles would be lit along the side of the road as an additional helpful gesture to assist the spirits find their way from the land of the living back to the other side.

• Some of the games and activities that are associated with Halloween, such as bobbing for apples, were originally fortune-telling rituals as described earlier in this article.

• Such divination activities involving apples were often used in Ireland and Britain, especially by young females who wanted to marry. If you’ve ever seen the TV show Alias Grace, there’s a scene in which two women decide to peel an apple to predict the name of their future husband (the belief was that after tossing the peel over your shoulder, it would land in the shape of the first letter of your spouse-to-be). This was actually a common practice that took place on Halloween.

• During the festivities of All Souls’ Day parades in England, some people would beg for food and were given pastries called “soul cakes” on the condition that they would pray for the souls of the family’s deceased relatives. This was known as “souling”. The giving of cakes was approved of by the church as a replacement for the older tradition of leaving out food and wine for wandering spirits.

• The practice of souling is believed to have evolved into what is now trick-or-treating. Instead of praying for souls in exchange for a treat, there is now an unspoken rule that no “trick” or prank will be played on any householder who provides satisfactory treats to those who ask on Halloween. Luckily, those apricot bars that my parents gave to their trick-or-treaters must have been considered worthy enough to be spared from any mischievous tricks.

Whether you celebrate the end of this month by honouring saints, remembering your deceased loved ones, playing spooky party games, participating in divination rituals, dressing up, trick-or-treating or anything else, I hope you have fun on the 31st of October.