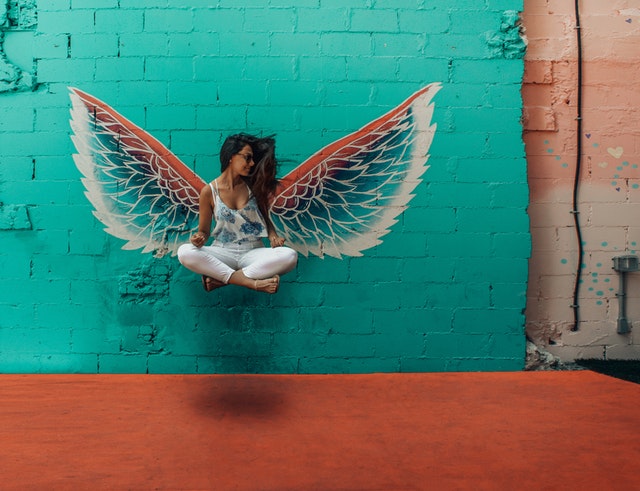 In last month's update I mentioned a book about angels and spirit guides that I found (or perhaps more accurately could be said to have found me, given that it almost hit me in the face at eye-level!).

That book contained examples of people who believed they had been helped by angels. For instance, there was one story about a woman who got locked outside her work building late at night without her keys or money, as she accidentally left them in her office. She prayed for help. She was then greeted by a man she’d never met before. The man unlocked the doors at the front entrance but was gone by the time the woman picked up her purse and keys and walked back outside. The next day she could find no one in her office who knew of the man as she had described him.

I was sceptical about some of these stories because the idea of an angel or “invisible helper” appearing in human form and then disappearing (sometimes rather dramatically as in the case of another example that was given in the book) seemed a little unbelievable.

Then I began to wonder if perhaps these instances didn't necessarily involve angels or guides magically manifesting as people and then disappearing, but that these invisible helpers had used real-life people as vessels or messengers of some sort, maybe without those people even knowing about it.

I remembered a time when I was feeling very stressed after recently finishing school. I had arrived at a large university campus where I needed to enrol for the upcoming semester, and I felt completely lost. I don't clearly recall why I was so freaked out, but I remember finally making the decision that I needed to just trust that I would somehow find where I needed to go and that it would be okay, and I put out the intention to receive help.

Shortly afterwards, as I made my way up one of the main walking paths of the university, an old school friend called out to me. I saw her up ahead walking down towards me. She stood out in a sea of other people, wearing all white and I thought to myself, “She looks like an angel”. She came down to meet me and asked what I was doing there. She ended up showing me exactly where I needed to go, what forms to fill out, waited patiently with me and pointed me to the right people I had to see, as she had already gone through the same process previously. I later wondered why she was at uni that day, given that she spent most of her day there with me. I know that she hadn't materialised out of thin air because I already knew her, but maybe she was just inspired to help on that particular occasion.

Something else that came to mind after considering the topic of spiritual assistance coming through human beings was a story my mother told me over 10 years ago after she returned home from an art class. This story raised the possibility in my mind that Mum herself may have been some sort of messenger without even being aware of it.

Around that time, Mum had enrolled in an eight-week painting course at a local community college. Due to illness, she hadn’t been able to attend classes for the first few weeks. After getting better, Mum got lost on the way to her first lesson, as she had difficulty finding the room she was supposed to go to. By the time she got there, the class was well underway and she (unintentionally) made a rather dramatic entrance, with the other students looking up from their artworks to behold a confused and frazzled-looking woman who they had never seen in the course before.

Mum was wearing a men’s check shirt that night, not because she usually wore men’s clothing but because she loved the colours and comfort of this particular shirt. When she sat down at her easel, she began painting a colour wheel as instructed by the art teacher. After a while, she became bored with this activity and began doing her own thing, using broad brush strokes up and away from the centre of the colour wheel. It was around this time that another class participant approached her. She told Mum that her husband had died at quite a young age a couple of years before, and that he had always wanted her to nurture her talent for painting. She said she felt guided to paint after his death, and having finally enrolled in a painting course, she believed that Mum’s appearance had been a sign that she was on track.

She said that the shirt Mum was wearing had been her husband’s favourite shirt, and that Mum’s hair that night even looked like her husband’s. She told her she wasn’t going to say anything at first, but then she noticed Mum was “painting angels” instead of the colour wheel everyone else was working on. Mum said that when she looked back at the image she had just painted, it did indeed appear as though she’d been painting angels, with the broad upward brush strokes creating a visual effect that looked like wings. Mum agreed with this lady that painting can be a very worthwhile pursuit and added that it can be as rewarding and relaxing as “being in the ocean and staring up at the sky.”

She told me that the lady’s eyes widened as she said, “That’s exactly what my husband and I used to do. We would often lie down on a boat together and look up at the sky.”

After she came home that night and told me the story, I said, “Mum, you must have been used as a messenger for that woman!” That actually ended up being the only class Mum attended,  because she became sick again shortly afterwards and wasn't able to go to any more lessons for the painting course – which must have seemed even more strange to the lady who believed she'd received a sign from her husband.

This whole thing makes me wonder, how often have we possibly been messengers, unknowingly? And would it make any difference if we believed in our capacity to act as a vessel for higher inspiration and messages for others, so that more of us could become conscious messengers rather than confused or frazzled ones?

I'd love to hear of any experiences you may have had where you felt that you had somehow served as a messenger during the course of your day-to-day life, guided to do or say the exact right thing to brighten someone's day, or offer them hope somehow.