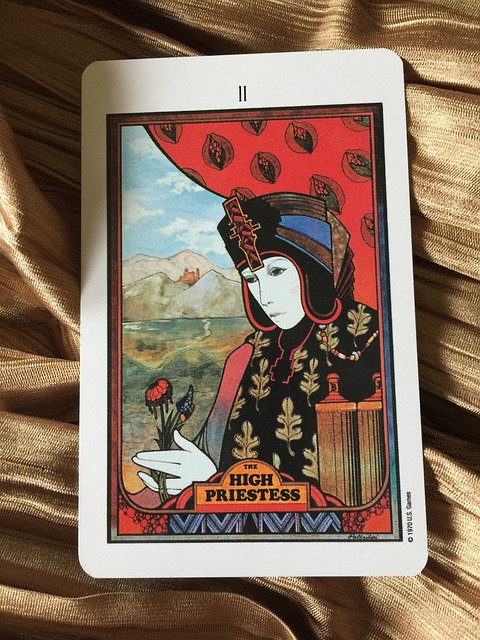 Last time I was at the Mind Body Spirit Festival, one of the other readers offered me a book about the tarot and we agreed to meet up after I had finished reading it. We were out having lunch when she handed me a deck of cards and encouraged me to read for her. I dismissed this idea, saying that I didn’t normally use cards for professional readings anyway. She told me to give it a go, seemed happy enough with what I shared about the cards that came up, and said, “See? I told you that you could do it”.

With the cards out there in front of us, someone who’d been eating lunch at a nearby table came over to look at them. She told us that she’d never had a reading before and would love to give it a go, then asked, “Do you do readings?”

I was slow to answer, but my friend responded with “Yes we do. Would you like one?”

She answered that she really wanted one but her lunch break was about to finish and she had to get back to work. She took a business card and I admit that I breathed a sigh of relief when she left the table, as I could continue eating my lunch again without any pressure to give a good on-the-spot reading!

What may not be obvious from the story above, is that I have personally loved using the tarot since my early teens. I first got my hands on a deck of cards that belonged to my sister who let me borrow them, and I would spend hours using those tarot cards not only for myself, but also for family members who did not always share my enthusiasm for the tarot, but who were generally good sports anyway and let me practice my readings on them.

There’s the saying that a picture is worth a thousand words, and the tarot is essentially an artistic expression of 78 themes or archetypes that can be used to bring extra insight and clarity in our lives. The tarot appeals to my inner artist, and by viewing the pictures that show up in a reading I often get a clear sense of what I need to do, and I also become clearer on what I want based on how I react to the cards, or by noticing what I hope that they’ll be before I’ve even selected them!

On a few previous occasions I actually have offered to do a tarot reading when I felt guided to use them whilst giving a general intuitive reading. In those instances, the cards would often add extra emphasis to whatever message had already been passed on in the reading so far, as though the cards confirmed that the information was important. However, up until now I have rarely even mentioned the tarot when offering intuitive readings.

Two weeks ago I attended an ‘Intuitive Tarot’ workshop where the presenter, Sarah Barry (aka 'Psychic Sarah'), announced that she had never sought a great deal of book knowledge or formal understanding of the symbols shown in each tarot card before (or even after) becoming a professional tarot reader … she freely and unashamedly admitted this, despite having been a full-time tarot reader for over 14 years. She certainly had no hang-ups about needing more qualifications or permission to be a professional reader as I may have had, and she spoke of the importance of relying on intuitive ability when reading the tarot.

During the workshop, we were asked to observe whatever impressions or emotions came up for us when viewing certain cards – sometimes those responses were very different even if looking at the same card from a few different decks. For example, the images appeared a lot more serious in some decks while they seemed more playful or creepy in others.

We also played tarot ‘snap!’, where we went around in a circle and had to shout out the first word that came to mind as we placed each card down. After leaving the workshop, I felt a lot more comfortable with the idea of giving intuitive tarot readings more often.

So, if you ever decide that you would like a tarot reading within an intuitive reading with me via phone or skype, then please let me know!