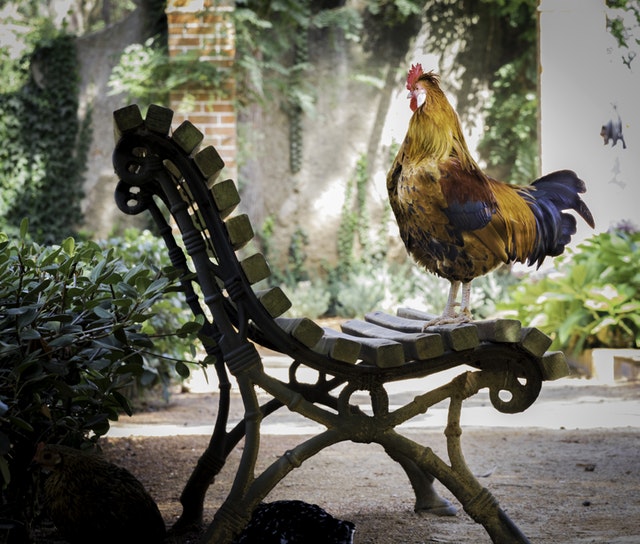 Happy New Year for 2017, and a very Happy Chinese New Year as well for today!

Despite being part Chinese myself, I confess that I didn’t realise it was the Chinese New Year until someone told me about it this morning. In case you’re interested, 2017 is a Fire Rooster year. Characteristics of fire roosters are supposed to include trustworthiness, responsibility, and punctuality.

Interestingly enough, punctuality is one area of my life that I’ve struggled with in the past especially when relying on public transport. I’ve taken various actions to prevent being late, and sometimes aimed to be over an hour early for an appointment, but it’s not uncommon for some unexpected delay to occur. It might be that the bus breaks down, or a train is delayed due to a signal failure.

Last month I shared my intention to practice surrendering as much as possible in 2017 and beyond. It didn’t even occur to me to surrender the issue of punctuality - it’s been such a longstanding source of stress that it has felt almost normal to me.

However, earlier this month there was one particular day (involving a rather extreme case of public-transport dramas) that led to an a-ha moment, when I realised that this could be an area of life I might also be able to surrender because trying to take control hadn’t seemed to help. On that day, I had walked to a nearby bus stop with about an hour and a half to go before I needed to get to my destination. Other people were at the bus stop too. I had used an online trip planner to make sure I was at the right bus stop, waiting for the right bus to get into the city. From the city, I would get one train with plenty of time to spare.

The bus never came. After some period of waiting, I double-checked the trip planning website. It still said to wait at that particular bus stop for the trip I needed to make. After some more searching on the site, I came across a small exclamation mark symbol which I clicked on. The message that popped up announced that as of that particular morning, the bus stop was now closed. No signs were on the physical bus stop, and the people around me clearly weren’t aware either. After letting them know that buses would no longer be stopping there, I made my way to another stop. A little inconvenient, but I still had enough time.

After getting to the city, I went to the train station and discovered that trackwork had commenced for the weekend, so no trains would be running on the railway line I needed to travel on. I found out how I could get to my intended destination by bus. Admittedly it would be slower but I could still make it in time.

Forty minutes went by and I was still in the city, where buses usually go past frequently. The bus I needed had either been ridiculously early, or was over half an hour late. I had seen several taxi cabs drive by while I was waiting at the bus stop, and decided that it was a safer bet to just hail a cab rather than wait any longer. After making that choice, no more taxis drove past! In a last ditch effort, I tried to sign up for Uber, which I’d never used before. Turns out someone else had signed up using my personal email address, and another separate person had somehow used my phone number to create their Uber accounts, which meant that I wasn’t able to create my own account and get a ride through Uber.

After the bus finally came, I decided then and there to surrender this stress around punctuality: ‘Please help me, I don’t want to go through this again any time soon. I surrender.'

It’s still early days, but I haven’t actually had any problems with public transport since then (these sorts of problems used to occur very frequently, sometimes several times in a week). Maybe it’s a coincidence, and maybe a one-off intention to surrender won’t be enough to lead to any long-term change regarding this situation, but the result so far is similar to what has happened with everything else I’ve been surrendering lately – things shift from being painful and hard to somehow becoming relatively easy and effortless.

On the topic of surrendering, something I’ve struggled with previously is not knowing what to do and how to surrender ‘properly’. I think the answer is just to ask, whether out loud or in your own mind, and to admit if you’re stuck.

I was recently reminded of the event that led me to start up my intuitive business. I had been doing practice readings for a while, but didn't feel ready to do them professionally, and the experience I had gave me the push I needed to take action. I shared this experience in an update back in April 2014. What I didn't share though, was that on the morning of that event, I had asked to be inspired and guided in a way that I'd enjoyed in the lead up to my professional intuitive training, but that I had somehow lost touch with. I think this was partly due to an assumption at the time that I needed to be more logical and rational in starting up a business, and that using intuition alone just wouldn't cut it.

I asked for help and I ended up standing in front of a window for what seemed like a long while. It was probably only about 5 minutes, but I did wonder if I was just wasting time or going loopy. But looking back, perhaps I was being guided to quieten down and to just start listening to the guidance that was available. Maybe staring out of that window while being open and 'listening' was like a warm-up exercise to prepare me to be guided in the minutes and hours ahead. It led to a trail of little decisions that each seemed to make no sense on their own, but all of which led me to a situation that became very important on my intuitive path. For those of you who don’t know the story, I ended up on an unexpected journey and landed on the doorstep of someone who had wanted a reading with me before but was too anxious to book one (I had no idea where he lived before then), and who told me that he was really needing some reassurance and guidance that day.

I believe that the process of asking for guidance and then surrendering to that guidance can be quite powerful. For me, I find it harder to surrender when things are going well or even just okay. But I don't want to wait anymore for moments when I'm lost or in pain, I want to surrender every day in order to live a more inspired life. For that reason, I’ve been taking some time out each morning just to practice surrendering and listening, again like a warm-up exercise for the day ahead.

If there’s anything you’ve been stuck with lately, maybe try asking for help and surrendering the issue to the universe, to your guides, to God or another higher power, to your wiser/higher self, or whatever else fits in with your belief system. Even if you’re not sure if you believe in any of this stuff, maybe give it a go just as an experiment, for example: ‘Hi there, I’m not sure if you exist, but anyway I’ve had this problem with [you can fill in the blank] and I really need some help. I don’t know what to do next. I surrender this to you.’

If you try this surrendering process, please feel free to let me know how it goes. I’m still learning a lot on this journey too :)