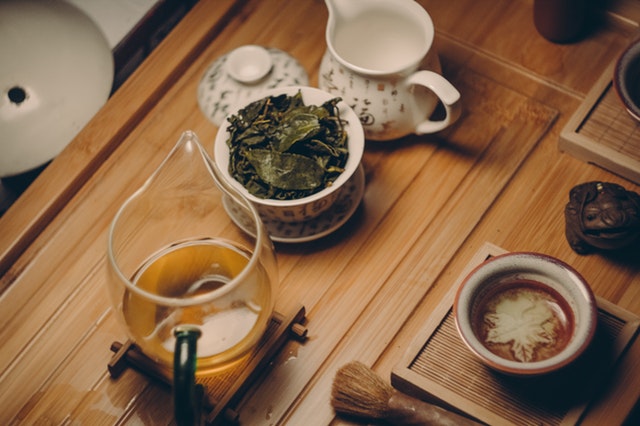 Last weekend I came across a stall at a local noodle markets event where a lady was offering tea leaf readings. I had never had a tea leaf reading before and the person with me asked if I was going to book one. “I don't know if I really believe in tea leaf readings” I said,  but soon after those words came out I decided to stay more open-minded! I booked one of the last two appointment times left, and had to wait a couple of hours before coming back for the reading.

The first time I heard about tea leaf readings was while watching 'The One', a TV show which tested a number of Australian's psychic abilities in a competition to find the most talented psychic. The test that involved tea leaf reading seemed to be one of the most challenging for many of the competitors, who had never done this type of reading professionally before. The only person who appeared to enjoy the task (and who eventually won the competition during the final episode) was quite impressive to watch. He picked up on both significant issues regarding the audience member who had sipped from the tea cup, as well as trivial details (e.g. he saw the image of honeycomb, and the lady admitted to just eating a whole bag of honeycomb before the show).

There was also a colleague at my previous workplace who liked to read tarot cards, as well as analyse the coffee froth in people's cups after they had finished drinking. She would tip the cup upside down, tap on it, and then interpret the images she saw after looking inside the cup. It always felt more playful than anything else, but it did make me wonder whether any object at all could be a potential tool for a reading, if something as simple as a coffee cup could be.

On my way back to the tea leaf reading stall, I thought it wouldn't hurt to prepare some questions in my mind in case I was going to be asked what I'd like to know. My expectations weren't high, but I was curious about what would happen.

When I got there, I was invited to sit down and take a sip from a tea cup, then pour the rest of the liquid into a bin. The reader turned the cup upside down and twirled it around a few times. She then asked me to do the same, before tapping on the cup. She looked into the cup and began the reading. I was asked for my date of birth, so the reading wasn't entirely based on looking at tea leaves. The reader also looked straight ahead into the distance at times while she was speaking, so I wondered if she was using clairaudience or another intuitive ability. Overall, the reading was a little vague and some of the information probably could have applied to most people (such as “you're facing many options”, “you like helping people”, and “you've been thinking of going on a trip”). However, a lot of what she said was quite accurate. It was also a fun experience, and she did cover most of the questions I had thought of beforehand even though she never asked for them.

It's noticeable that whether I'm getting a reading as a client, or giving an intuitive reading to someone else, more detailed information seems to come through if questions have been prepared or written down in advance (even if I'm not told about this until towards the end of a reading). It seems true not only for readings, but for all areas of life that when you set clear intentions – and particularly if you write those intentions down – you're more likely to achieve the outcome you desire or to find what it is you're looking for.

It amazes me how few people like to set New Year's Resolutions. I actually enjoy setting new resolutions or goals each month, but the start of a new year seems even more special. The most common reason I hear for not writing any resolutions is: “I'll just break them anyway” or “if I set goals, I'll feel disappointed if I don't reach them.”

From my own experience and from listening to others who have previously written specific goals down, it appears that more often than not, these goals end up being achieved (though sometimes it takes longer than originally planned). Other times though, it becomes clear after writing them that some goals are just not worth the effort. I often will write a goal down, and then seeing it on paper makes me realise that I don't care enough about it – the lack of excitement when reading it just highlights how unattached I am emotionally to reaching the goal. I don't see this as a waste of time, because without writing it down and seriously contemplating it, I would probably end up keeping it there at the back of my mind as something I may want to get done later – this wastes valuable energy that could be directed to a goal that really does matter to me. In writing it down, it clarifies whether I feel motivated to work towards the goal or not.

Some people set intentions for the year, others for the month – but what about daily?

I went to a retreat in September this year run by a man named Peter Grunwald. Peter emphasises the importance of intention-setting every single day. In fact, he recommends setting intentions throughout the day for different activities and tasks. Some of his own examples were, “the intent to be guided by my highest guidance”, “the intent for learning and playfulness during this workshop”, “the intent for love, connection and laughter with family”, etc.

Apparently you can set intentions that can impact upon other people too. One of the activities at the retreat involved standing in a circle and throwing/receiving a ball with awareness. The difficulty of the activity increased as the days went on – starting from one ball at a time to having to catch and throw multiple balls in the circle. The final step sounded like a joke – we were to get in pairs, stand a certain distance apart, and both close our eyes before one person would throw the ball successfully into the hands of the other person.

This activity went nowhere for a long time, until Peter approached me and the other person I had paired up with, and said “When you catch the ball, make sure you celebrate”. I was surprised that he used the word “when” rather than “if”, since “if” seemed more appropriate given the impossible task we'd been asked to do. He walked away, my partner and I closed our eyes, I threw the ball, and my partner caught it! Peter later acknowledged that holding a vision or an intention for other people can be a powerful thing, especially when they are made aware of it. Until he voiced his conviction that we would throw and catch a ball with our eyes closed, we didn't really believe it was possible.

It was also consistent with the theory that seeing the potential in others can help to empower them to make their dreams a reality. If you have anyone in your life who seems to believe in you more than you do yourself at times, make sure you have them nearby when you set your New Year's Resolutions!

In terms of intention-setting for myself, I've been practicing daily intentions since late September and I'm absolutely hooked, because it works. As instructed during the retreat, I set two intentions at the start of every day (if not the night before), and they can include words such as “love”, “fun”, “excitement”, “compassion”, “clarity”, “laughter”, and the list goes on.

On the few days when I forgot to set intentions over the last three months, I noticed that I felt more stressed and relatively unfocussed throughout the day. One particularly memorable instance was when I arrived home after a busy and hectic day, feeling emotionally drained after talking to someone who was planning to end her life, and I wasn't looking forward to doing it all again the next day. I remembered that no intentions had been set for that day, so I intended for the following day to be easy and playful, not feeling sure that it would be possible. The next day, however, my workload ended up being much less than expected, the suicidal person from the day before had expressed her commitment not to act on any thoughts of self-harm, and I ended up playing games with a couple of people who approached me carrying the game 'Connect4', which I hadn't played since I was a teenager. It did end up being an easy and playful day!

Ordering from the Universe

If you feel reluctant to set your intentions, or to write your goals or New Year's Resolutions down for whatever reason, think of it as like ordering from a restaurant. Would you go into a restaurant and say “no I don't really want to order anything in particular. I might change my mind once the meal is ready, or I suspect I won't like it”? What you're more likely to do is to have a look at the menu, notice what meals appeal to you the most, and put in a specific order for what you want.

When you think of the universe as a powerful, creative force that you can order from, just like at a restaurant, and which supports your intentions and goals when you make them clear enough, amazing synchronicities are likely to pop up in your life. Even if you take a purely logical approach, it makes sense that getting clear about what you desire will increase your chances of finding it or making it happen.

Whether you believe in a universe or higher power that supports you, or your potential to create what you want on your own, or a bit of both, remember to make your goals 'SMART' to increase your chances of achieving them:

Specific (how, where, and when is it going to happen?)

Measurable (how will you know when it's achieved? How will you measure your progress?)

Achievable (is it possible to achieve it?)

Realistic (is it realistic to achieve it, considering your current commitments and capability?)

Time-limited (when will this be achieved by? Without a deadline, it's less likely to happen).

All the best for your own intention-setting, and hope you have a fantastic festive season and a Happy New Year!