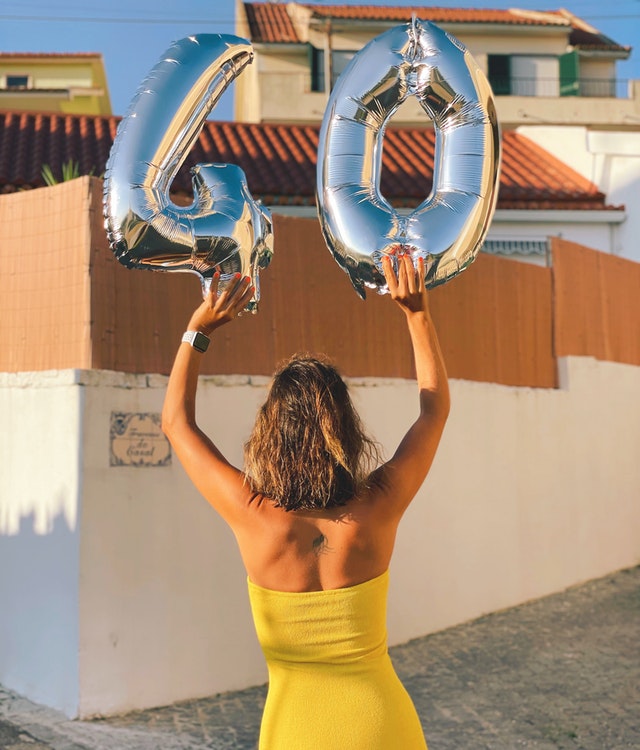 At about eight years old, I read a book in which the main character (a young girl) eventually meets a powerful lady with long silver-white hair towards the end of the story. I remember wanting to be like that old wise woman full of strength, mystery, and beautiful silvery white hair down to my waist.

The reality is that when I found my first white hair at the age of 31, it did not lead to any warm fuzzies about becoming older or wiser. It made me think of a Leunig cartoon my uncle sent me in the 1990s, showing a man who wakes up to find a “birthday fairy” drawing on his face. “Wh ... Who are you? And what are you doing to my face?” he says in the speech bubble of the cartoon. The birthday fairy explains that once a year, she visits while the man is sleeping, to draw a few lines on his face, insert a grey hair or two, and then adds more of these as time goes on. She then flies out the window, leaving the man to stare at his new wrinkles in the mirror. The fairy seemed sinister to me when I first saw the cartoon, but in hindsight it’s probably a blessing that such changes in our appearance are made slowly over time. Waking up with a head full of silver hair, no matter how beautiful, would be a shock!

As I approach the big 4-0 this year, I’m reminded of a conversation with a colleague several years ago after I wished her a happy birthday. She said that birthdays were fun until she hit 40. The expectation was that things would go downhill from there, and she has dreaded birthdays ever since.

I prefer the attitude taken by singer and actress Patti LaBelle, who tells us to “take advantage of birthdays to celebrate fiercely.” She has described herself as continually improving with age:

“Here’s what I know: I’m a better person at fifty than I was at forty-eight … and better at fifty-two than I was at fifty. I’m calmer, easier to live with. All this stuff is in my soul forever … It’s the worrying — not the years themselves — that will make you less of a woman.”

My school friends once had a debate about what the best age of life would be. I came up with “35”. It seemed mature enough to be independent, to have life sorted out to some extent, while also young enough to be energetic and physically fit. The response was, “35? That’s so old!” These were the same people who later lamented that they were past their prime after turning the grand age of … *drum roll* … twenty-one. A friend of my sister’s also told me she was “over the hill” while in her mid-twenties.

It’s all relative. When I was 20, I felt rather aged while hanging out with a bunch of teenagers. And yet, years later, I identified as young when working as part of a team of people who were senior to me.

In hindsight, my guess that 35 would be a good age was not too bad. I can honestly say that the happiest years of my life so far have been during my late thirties. I’ve also liked the idea of being 42 – no, not because it’s the meaning of life according to The Hitchhiker’s Guide to the Galaxy, but because of something I overheard at a yoga class when I was 19. The woman next to me had just given birth to her first child and the yoga teacher asked how old she was. “42,” she said. “Me too,” the teacher responded, “It’s a great age.” She nodded, “It’s the best age.” It made me want to hurry up and be 42.

Those who embrace their age have always inspired me. I’ve been playfully accused of having a lady-crush on the author and speaker Marianne Williamson, after going through a phase of listening to many of her talks; this is because I would often comment on how hot she looked for a woman in her 60s. She has discussed the topic of age in her courses and books, such as Age of Miracles, and has expressed quite an empowering attitude towards ageing and death. Although she has acknowledged feeling apprehensive about the process of dying, she has stated that she does not fear death itself, largely due to identifying more with her spirit than her physical body. Regarding age, she has said: “Once you reach a certain age, you’re either slowly dying or slowly being reborn. I want to choose the latter.”

It does seem very plausible, based on the accounts of others, that the most satisfying years of life are yet to come. For example, in a psychology class at university, we were presented with research findings suggesting that for many people, the greatest happiness and fulfilment is experienced during the “empty nest” phase (i.e., after the kids have left home). This challenges the popular idea that the best years of life are enjoyed during our youth. I’ve heard a number of people say that they were happier in middle or later age than in their 20s, and would never want to go back in time even if it meant having a younger, healthier body.

B-school founder Marie Forleo was in her mid-40s when asked on The School of Greatness Podcast to share what her biggest lesson of the past decade was. Her answer was that things “keep getting better … I love that the best years are still ahead of me.”

In my 20s, my biggest lesson was probably to do with listening to my intuition. During my 30s, the focus was on following intuitive guidance no matter what, and realising how much joy could come from that. Over the next decade, my hope is to encourage more people to strengthen their intuition as a way to lead more inspired, joyful lives that can positively impact others too.

In these final hours of being a 39-year-old, I’ve decided to reduce the price of the Clear Channel Course to its earlier discounted rate of $39*. If you would like to sign in or sign up for the course, please click here.

As was done last year, I’m offering some live Q&A calls again for people who would like to ask questions, access some extra support, or go through more experiential exercises while working through the Clear Channel Course.

These calls are likely to go ahead on Saturdays 11am AEST / Fridays 6pm Pacific Time. They will be free for anyone who has signed up for the Clear Channel Course, and previous participants are welcome to join again. The calls won’t be recorded this time.

Please let me know if you’re keen to participate in these calls and if so, whether you would prefer to attend weekly or fortnightly.

*The usual price will come into effect again after the final group Q&A call for Week 10 finishes up.