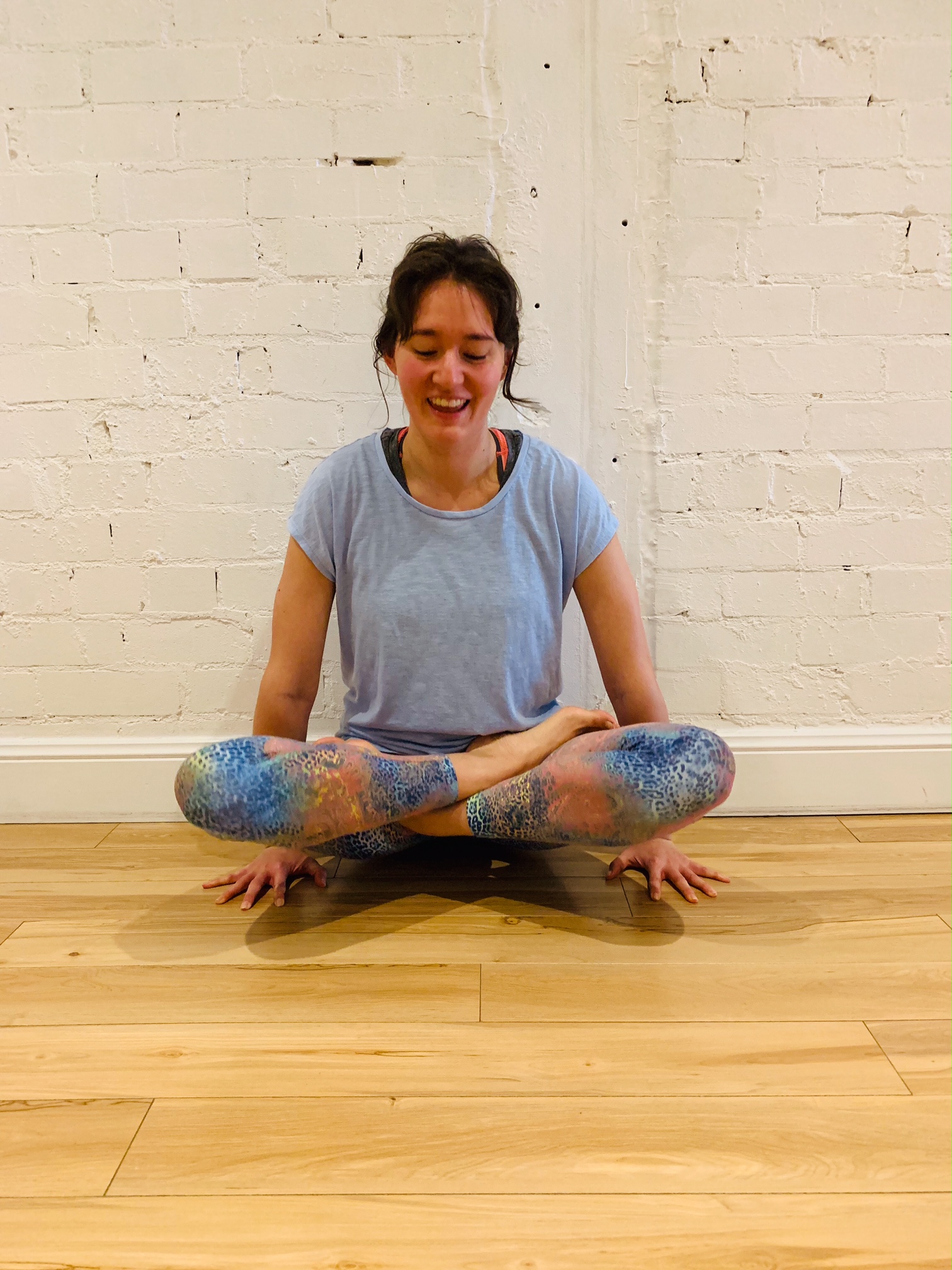 If you’ve ever felt as though you’re in a good rhythm, whether that was due to playing music, enjoying physical exercise or dance, or feeling somewhat effortlessly engaged in any activity, you may have described yourself as being in the flow. In fact, the word “rhythm” comes from the Greek word “rhuthmos”, which is linked to “rhein”, meaning “to flow”.

On the weekend, I saw a post that had been shared on social media last month by the owner of my local yoga studio. It included a photo of me that was taken at class by one of the yoga teachers, as well my answers to questions I’d been asked for their monthly “meet the student” interview.

Looking at the post, I was surprised to see the number of times I’d apparently rocked up to class since first visiting the studio a few years ago (I hadn’t realised they kept tabs on that sort of thing!) and I wondered how and why I had consistently attended lessons after practicing yoga in such a sporadic way in the past, on-and-off from the time I was fourteen years old.

I know that pain prevention could be a strong motivator to practice, as the longer I go without practicing yoga, the more I tend to experience increased frequency and intensity of back pain. At the same time, I’ve had issues with my back since childhood due to having scoliosis, and it wasn’t always enough to get me to exercise.

Perhaps the regular practice was a result of having set up an auto-payment option, which made it sensible to attend enough classes to make it worthwhile financially. Then again, that hasn’t always worked for me either (nor for many of my friends who had signed up for gym memberships only to cancel them shortly after realising that they were hardly ever going to use the equipment available). I once paid for a year’s membership at another yoga studio and stopped going after a few months. I recognised that this was a terrible waste of money, but I just couldn’t make myself go there, even with the many interesting classes available, the opportunity to hang out in a hammock during antigravity yoga, and the temptation of unlimited acro-yoga lessons.

What was it then? I eventually figured out that I’d found a rhythm that worked. There were certain days, as well as certain times of the day, when it simply felt good to go to yoga. From mid to late morning, I would want to go. I would enjoy being there while I was at class. And then I’d feel great afterwards. I noticed that in the afternoon or night classes, I wasn’t motivated to turn up but sometimes forced myself because I thought I should. If I managed to actually get there on time (which wasn’t often), I found that I wanted to go home and my mind would be preoccupied during class on what I would I do afterwards. Sometimes I even felt I’d wasted an hour by the time class was over, as though I would have been better off doing other things instead. By working out my ideal rhythm, I managed to commit to a long-term regular practice that had eluded me in the past.

The decision to consciously do a certain activity at a particular “right” time, to increase our chances of getting in the flow, can be extended to other things too.

For example, I will only meditate if I make time for it in the morning. It won’t happen at any other time, nor will I want to do it at any other time. I remember a day late last year where I interrupted this rhythm by checking email and scheduling a call so early that it clashed with my morning meditation. The reason this is memorable for me is that I didn’t just have a bad day afterwards, I had a bad week. When we get out of the flow, the consequences can last longer than we might expect.

A couple of years back, I worked through the one-year spiritual self-study program of A Course in Miracles, and there were several days when it was recommended to do a particular mental/spiritual exercise last thing at night before going to bed. That never felt quite right for me, and I would often fall asleep before getting around to completing the exercise. I then discovered that doing it in the early evening was fine – I would actually enjoy it then.

Another activity that’s fun for me to do in the early evening is jumping on a trampoline/rebounder. I don’t like doing it in the morning, during the day, or any time after I’ve eaten dinner.

And when night starts to fall, if we’re not bombarded with artificial light and sound and other craziness, there’s a certain amount of calm and introspection that can happen, which feels particularly special at that time. Some things really are best enjoyed at specific times of the day.

This concept of rhythm and flow can extend beyond our daily routines. In her book Rise Sister Rise, author Rebecca Campbell writes about various cycles that are important to honour, such as the four seasons of each year as well as a woman’s monthly cycle. She shared that after many years of hard work and pushing through period pain, she now allows herself to properly rest during menstruation and will not schedule any sessions with clients, interviews, etc at that time.

Our weekly rhythms and cycles can be interesting to explore as well. There are particular days of the week when I enjoy working, and others when I just want to chill out. If I go against this rhythm, such as by doing a lot of work or checking email on a Sunday, it feels wrong. I’m not religious, but I can appreciate the practice of observing a Sabbath day, which has traditionally been kept “holy” through making time for rest, contemplation, prayer, quality time with others, and by not working.

Even when it comes to organising social events or casual catch-ups with people, you may notice that certain future dates stand out for you as “right”. Even if it’s a meeting to be held quite far down the track and it doesn’t make any logical sense to pick the particular date or time you have a hunch about, try to trust that hunch anyway. It may be that it turns out to be the time of the month and/or day when both you and the other person (or people) are in the perfect mood to connect and socialise.

I’ve noticed that that are certain days and times that are more conducive to getting into the flow when it comes to writing too. When I started out in this business, there was a common piece of advice I heard from successful business owners that it’s more efficient to write many newsletters or emails in advance – even as much as a year’s worth of articles – and then schedule sending them out for later. This makes a lot of sense in terms of getting all the hard work out of the way in one go and then automating the delivery of your messages for a long time afterwards. That wouldn’t work for me, though. I write when I want to. I have tried the approach of trying to push through writer’s block when I wasn’t feeling inspired, and I much prefer the alternative of letting the words flow, and flow quickly, when I’m in the mood to write. Unfortunately perhaps, this mood sometimes only comes about at the last minute, or on the final day of a month when I have another monthly update due to send out!

This topic of rhythm and flow makes me think back to when I first entered the Cole Classic two-kilometer ocean race held at Sydney’s Bondi Beach many years ago. I had swum laps in swimming pools and had surfed before, but this was different. I had swum with the waves before, but never against them. I copied other swimmers at the beginning of the race, as they dived in to the surf and swam across the waves of an ocean that was doing its best to spit us back out. I inhaled salt water and spluttered and gasped for air while trying to compete with the other contestants. It got easier once we swum past the waves. I got back into my rhythm and was happy with my result in the race, but I never forgot the difference between what it felt like to go with the flow of the ocean versus against it.

The flow of the ocean could be considered a metaphor for the larger flow of life. Are there times when you feel you’re going with the flow, or swimming against it? Does it change depending on what activity you’re engaging in? Or does it change when you engage in that same activity at different times? If you’re not already conscious of your own rhythms in life, try to pay attention to these and how to best get into the flow – daily, weekly, monthly, and even yearly – with whatever it is you choose to do.

From this month, there will be a “flow” to something slightly different in terms of how services are offered during the 10-week intuitive consultation packages. Previously, these would include a one hour session – by phone, Skype or in person – on a weekly basis for 10 weeks.

For various reasons (including the fact that I’ve felt guided to do this!) the next 10-week package is going to allow for intuitive services via phone, Skype, and email as desired and mutually agreed upon throughout the 10 weeks; there will be no set number or limit to the sessions offered. Similar to the goal I originally had in mind when I introduced the one-off intuitive consultations, another aim for this type of package is to empower others to achieve greater confidence in accessing their own answers and to follow their intuition more often in future (I guess this means that one outcome of the package may be that you would no longer feel any strong need to consult a professional intuitive again!) It’s the sort of package that I would have absolutely loved to have taken advantage of at a time when I was facing a lot of important decisions and working on trusting my intuition.

As you can probably imagine, this new approach will require significantly more commitment in terms of time and effort compared to the type of services I’ve offered previously. As such, I have decided to remove the option of booking one-off appointments at this stage.

I’ll continue to offer one-off intuitive services as part of the free monthly competition for email subscribers at least until the end of the year, so you can sign up if you haven’t already and enter your name for your chance to win!