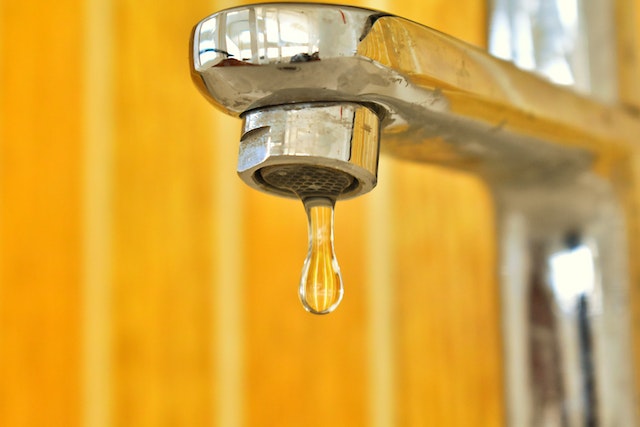 Last month, an ongoing plumbing issue at home was finally resolved. This led to an unexpected lesson and, in hindsight, may have been a blessing in disguise.

Back in October, hot water started streaming out of the shower despite the taps being turned off. The old taps were replaced with new ones and yet the problem arose again a week later. Eventually, it was agreed that the two traditional spinning taps in the shower would be replaced with more modern quarter-turn ones (despite being told that it might not work, due to the configuration inside the bathroom wall). I held my breath as the taps were put in and tried for the first time. After a few seconds of dripping, it seemed safe to conclude that the job had been a success.

It was cause for celebration! I ordered takeout from one of my favourite restaurants. Shortly after the food arrived, I said out loud that I couldn’t believe the plumbing had finally been fixed. As if on cue, the sound of dripping was heard from the bathroom. Soon there was a steady flow of water leaking out.

It's been said that if the same issue keeps popping up in your life, there’s a lesson that hasn’t yet been learnt. I’ve been bothered by plumbing concerns since childhood – from the consistent dripping of water in my parents’ bathroom and kitchen, to on-and-off leaking of various taps in different homes during my adult years. While certainly not out of the ordinary, and often simply dealt with by arranging a single visit from a handyman or plumber, I’ve always found leaking taps to be incredibly annoying.

According to books on Feng Shui, leaking taps symbolise money going down the drain. And yet, I consider myself to be financially responsible and this didn’t seem to be the lesson to learn here, if there was one. As I watched the water leaking in the bathroom again within hours of the new taps being installed, I called out to the person in the next room, “I know this sounds superstitious, but can you look up any metaphysical meaning behind leaking taps?” He kindly obliged and yelled back: “It symbolises being overwhelmed!”

Ahh, that was interesting. I recognised straight away that there could be value in learning to manage overwhelm.

Although I’m aware that getting lost in mental chatter gets in the way of listening to my intuition, I’ve had a tendency to indulge in it. At times it feels beyond my control, but at other times it does feel like a choice. Some thoughts are just so compelling.

It reminds me of something amusing that a meditation instructor told me last year, which his teacher had passed on to him: that it ought to be as unacceptable to let your mind wander aimlessly as it is to fart in public. In the book Mindfulness in Plain English that I’ve referred to before, there’s an invitation to be consistently aware and guard the mind. With that level of attention, you don’t carelessly let anything in to your consciousness that you don’t want to enter.

In the past, I haven’t been particularly vigilant when it comes to dealing with thoughts that have the potential to spiral into overwhelm.

With other types of thoughts, I can be much more proactive. For example, if I get so much as the faintest sense that a shadowy depressive state is about to grow or descend upon me, I take action to face it right away. I wouldn’t dream of ignoring it or suppressing it in the hope it will go away by itself. If you’ve read Channel, a large part of Chapter 6 (‘Down in the dumps? How to manage energy levels and mood for greater intuitive ability’) was based on strategies that have worked for many other people as well as proved effective for me personally, ones that I continue to use to manage my mood. As a result, my baseline level of happiness is higher now than it was when I was younger.

With overwhelm, however, it’s a different story. I’m not as strict about keeping anxiety-provoking thoughts in check. What would it be like to hold myself to a similar standard with managing overwhelm as I do with mood?

For any boundary you want to set for yourself, it may help to treat it like a modern lever or quarter-turn tap.

Ever since my teens, I’ve longed to have modern taps that turn water completely on or off. With a traditional spinning tap, the boundary is less clear. If it’s not turned tightly enough, then water continues to drip out. The tighter it’s turned, however, the more quickly the washer wears out which will lead to serious leaking later on. This means that when water drips, it’s unclear whether you need to turn the tap tighter or leave it alone – it could simply be the result of water that’s lodged in the tap or shower head and is now coming out in its own sweet time. If the washer is damaged, then neither of those solutions will actually work and the best thing to do is call a plumber.

With modern taps – such as the lever you pull up and down, or the quarter-turn taps that allow full water pressure on one end and completely shut off the flow on the other – you never have to think about whether a tap is turned too tightly or not tightly enough. The boundaries are very clear.

Incidentally, as soon as I made the decision to no longer passively accept overwhelm and to create a boundary around certain thoughts, I knew that the dramas around leaking taps would end even before they were actually fixed. There were several more visits from plumbers that took place (with more than one insisting that the problem could be solved by putting traditional spinning taps back in – thank God they were wrong). The wall had to be knocked out and new pipes put in. It was a big job but it got done. The modern taps have remained and I’ve been reassured that the leaking will no longer be a problem.

What boundaries would you like to set for yourself? It doesn’t have to be about mental states or thoughts. It might be as simple as setting a clear bedtime. No longer going to sleep past midnight, for instance, if you know that it’s not conducive to optimal functioning the next day. Or perhaps it would feel good to set boundaries around using your phone.

A few months ago, I showed a relative how to put her phone on aeroplane mode. Previously, she would hope that no one would call or text during her naps. But hoping is not setting a boundary, it’s wishful thinking, and more often than not she would say she had been woken up by someone trying to contact her. As she wanted to continue taking the phone to bed in case of an emergency, the use of aeroplane mode seemed like a sensible solution. She loved it! No longer was there a blurry boundary, where she’d tell herself that she’d ignore any calls and not respond to texts until after a nap (those ring tones and beeps would still disturb her sleep). Now it wasn’t left up to chance whether or not she’d be able to rest without noisy interruptions. That boundary of not being disturbed during naptime became crystal clear.

Let’s not settle for blurry boundaries with other people or within ourselves. A clear boundary requires no hope, decision fatigue, or energetic leakage. It will make you feel strong, certain and good about it, perhaps even before you’ve tested it out.

If you’d like to share any new boundaries you’ll be setting, I’d love to hear about them!